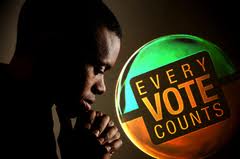 Not voting is being AWOL, tantamount to an act of cowardice of not being available to carrying out your duty to vote in a democracy. It is a duty if you want to preserve and protect the way of life a democratic form of government affords, which is each citizen’s responsibility.

At a bare minimum, it can surely be considered laziness. What iss the difference between being a nonvoter in a democracy and a deserter in the military? They both represent a dereliction of duty.

Neglecting to vote is cowardice because it shows a lack of bravery to take a stand, and vote for one party or the other and its candidates. It is laziness because it shows too little energy to invest the time to understand differences and the positions among the picks in order to make an educated choice on Election Day.

Cowardice and laziness appear particularly fitting when we will likely face some of the most important and closest races in recent history — when every eligible voter needs, and should desire, to be counted. America in many ways is at a critical crossroads.

While all attention is being focused on the undecided voters, something has to be done to prick the conscience of the non-voters. Nonvoters have become comfortable being nonentities — not counted — relying on others to make the choice, just to become chronic complainers. Not voting is being AWOL.

There are currently growing reasons to be alarmed. There was a time when nonvoters would have already been too ashamed to acknowledge they failed to vote or are not registered. But nowadays, many assert their non-engagement with ease and relaxation — apparently wearing this as a badge -patriotic honor. You can nearly hear their pious boastings: “Voting for those incompetent crooks is beneath me. Politics and government are no longer honorable professions.” While the present Congress has among the lowest approval ratings in recent in history, it is still no alibi.

Brash, non-voting braggarts, too many of us have become.
What a way to demonstrate being a proud American, thankful to those who made it possible, by giving their lives for the democratic principles many they fervently believed in, such as the right to vote. Not voting is being AWOL.

More and more, we’re squandering the privilege without any shame, no remorse, and no sense of duty. Really little connection is made between failing to vote and the quality of the well-being of one’s community, the quality of neighborhood schools, availability of jobs, and the buying power of a hard -earned dollar.

Will our democratic process endure if this downward spiral of non-voting continues? If fewer and fewer Americans vote what type of democracy will there be?

Many young people offer such excuses as politics is uninteresting, or dull, irrelevant. Many older individuals hide finding fault, placing blame as solace is found in self-righteous indignation and the ignoble standing of being a nonvoter. Candidates can work to earn the right to hold an office to serve the individuals and the country they represent. Our political process is not a one-way street. Achievement or its failure is not made completely to the candidates.

You will see Presidential primary elections and other local elections held until November 2012. Candidates present clear and distinct alternatives. If you’re maintaining there is no difference between Newt Gingrich, Mitt Romney, Ron Paul, or Rick Santorum, you are truly out of contact with your government and its future impact on your life and the lives of your nearest and dearest.
Voting is a little investment that gives crucial results in the quality of life in America, in your state, in your city and the entire quality of our democratic procedure.

If being wearing spinelessness and trifling shoes does not fit you, then do not wear them. One must ask, however, “If it were up to nonvoters, where would our governmental process be?”

The morning after any election you could have been apart of, will your action have demonstrated interest or evasion?