The Obsession With Repealing and Replacing Obamacare

The Republican Party has lost its way and identity. Will the real Republican Party please stand up? Should anyone respond to that question, who would it be? President Donald Trump and his so-called base? The Tea Party enthusiasts who were successful in 2010 in getting elected Congressmen who self-identify as neoconservatives on one end of the spectrum and libertarians on the other end?

The Republican Party has lost its way and identity because on any given issue, one faction seems unable to control the debate. No faction can seem to win when it comes to a path forward, and therefore there is perpetual gridlock, and nothing of substance gets accomplished.

It is a party that is divided against itself and is in danger of self-destruction. No one would have imagined that the “crabs in a barrel” would be an accurate description of a political party that once boasted of being the “Party of Lincoln.” Abraham Lincoln must be tumbling in his grave. I would imagine that more recent Republican Presidents, Dwight Eisenhower, even Richard Nixon, Gerald Ford and Ronald Reagan, must be tumbling too. 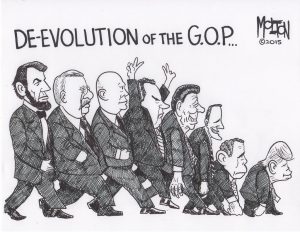 What has happened to their party? The Republican Party has lost its way and identity.

Nothing provides more evidence than the current political environment. The Republican Party is in charge of the White House, the U.S. Senate and the U.S Congress, even most state government. But which faction of the party is in charge? It appears neither because nothing is getting done, except an exchange of name calling, finger pointing, blame, invective, and insults, while policy efforts are left in confusion and in ruin. Meanwhile, the public is caught in the lurch and the issues they care about remain unresolved.

Has the U.S. Government ever been in such disarray, such dysfunction? A house divided against itself shall not stand. Not my words, but those of the good book. But, the grave concern is, the Republican Party will not be the only one to suffer. The direction and well-being of the country, is at stake.

Will the real Republican Party get its act together, stand up, and move the country forward?