During the impeachment trial of President Donald J. Trump, the world is watching the United States Senate and will see how each member carries out his or her sworn duties under the U.S. Constitution and their obligations to the people who elected them. Not only will the world be watching, but so will the nation, its voting citizens, and its children.

Will each Senator be beholding first to the Constitution, to which they swore a solemn oath to always do the lawful and right thing to protect and promote the well-being of the United States of America? Will they bother to find out the wishes of the voters who put them in office? More importantly, if those voters are misinformed will the Senators bother to informed them with the facts?

The world is watching the United States Senate in how they conduct this trial. But, not only the world, but voting citizens, and impressionable young people who may want to enter into public service. What about all the children who model the behavior they see in adults? How will they come to value the meaning of taking an oath, seeking the truth, and acting on facts, putting the interest of others before their own? 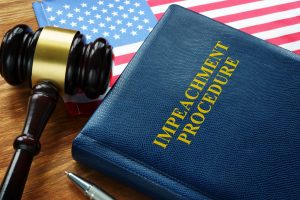 Our allies across the world and other fledgling democracies have an interest in this trial and its outcome.

But there is a lot riding on this trial, other than the outcome. How it is conducted will be just as, if not, more important. For if the trial is carried out correctly, the world, the nation and other impressionable minds watching will be the better for it. No matter what the outcome, it will be more acceptable if a fair and real trial has occurred rather than a partisan side show. The world is watching the United States Senate.

As the impeachment trial of President Donald J. Trump unfolds, the world is watching the United States Senate, along with the nation, its voting citizens, and its children.

America’s future is at stake, as history will surely judge. Hopefully, not harshly. The senators are obligated to vote for the current and future well-being of America.