voting requirements should be the same. Photo Credit: hernan4429

In a democratic republic such as ours in the United States, voting requirements should be the same across all fifty states. Why in 2021 does voting in America seem to be a bigger problem than ever? No doubt, we all have an opinion, based on facts or not. But this recent attempt to change the rules once again is not new. That supposedly basic right for all has always existed in principle, but not in practice.

Some Americans have had the privilege of exercising the right to vote for more than two-hundred years, since the country’s inception. That privilege was exercised by White men of course. It took more than another hundred years for women to exercise that sacred privilege outline in the Constitution. We all know, that it took Blacks another fifty plus years after women to exercise the right to vote. From the framers to lawmakers today, you would think that they should have realized that voting requirements should be the same for and extended to all American citizens.

Most of us are very aware of voting’s troubled history in this democratic republic where every citizen is endowed with that basic right. It was outright denied to women and Blacks. Many over decades and across generations appealed, protested, fought and died to exercise a right that was already theirs. And for Blacks, the fight seems never ending. That right is still at risk today. All kinds of barriers and reasons have been imposed when voting requirements should be the same for all. 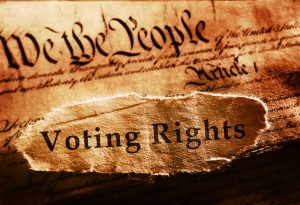 Voting Requirements Should Be the Same.
Photo Credit: zimmytws

But, what do you make of all the uproar today where states all across America, suddenly need to issue new legislation, new laws, to regulate the voting process. They vary all over the place—from limiting or eliminating mail-in voting, to changing identification requirements, to severely reducing the number of mail boxes where ballots can be dropped off, to limiting the number of polling places and hours where legal citizens can go to cast their votes. This recent barrage of changes in voting laws show more than ever that voting requirements should be the same across all states.

If voting reform is to take place, it should be to improve the process, not to make it more difficult to cast a ballot. The same positive steps can be taken across states to safeguard the voting process while making it more convenient to vote. Why not consider declaring the presidential election a federal holiday? Why not moving voting to a day on the weekend?  Instead of taking different measures as many states are doing now to deny many citizens their right to vote, why not pass uniform and consistent measures, which confirm that voting requirements should be the same across the county.

One America. One voting process.